We use cookies to personalize content and ads, to provide social media features, and to analyze traffic to our site. I want to know more

Collaboration in the development of a priority allocation model between the Faculty of Transport Sciences at the University of Zagreb (Hrvoje Haramina as well as Ivan Belobrajdić) and Adrian Wagner from the Carl Ritter von Ghega Institute followed by a conference presentation at ZIRP 2020. 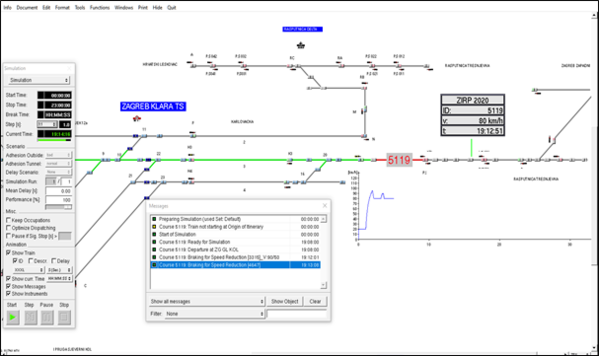 Delays in the timetable are a recurring occurrence in rail operations. However, delays can also mean that track areas have to be used by two trains at the same time. In this case, it is necessary for those responsible to make a selection and give priority to one train. Such decisions must be made in a transparent way and according to established criteria. The study with this issue. In order to support the personnel in this process and also to make the reason for the decision verifiable in retrospect, a new model for decision support in the dispatching of rail traffic was developed. The developed system takes into account various factors, such as the type of train (local freight train, international long-distance train,...), the already existing delay or the tonnage. The underlying rules thus try to ensure the best possible handling of the operation and follow common train priority rules. To verify the suitability of the system, it was tested in a simulation of the Zagreb Klara station using OpenTrack, which represents a junction station between five railroad lines. The simulation was based on train data from the 2019/2020 timetable year and the network of the infrastructure operator HŽ Infrastruktura d.o.o. This was used to test and evaluate various situations.In its current form, this type of expert system is intended to help the dispatcher deal with problems in assigning train priorities, especially in more complex traffic situations, although the solutions offered by the system are not mandatory, but only a recommendation. The developed results were subsequently presented (virtually) at the ZIRP conference.